Williamsburg is one of my very favorite places to visit.  I love the interactive living museum with original and reconstructed buildings.

Along with Nancy and Nathan and girls, we stopped by on our way home from the Outer Banks after a wonderful vacation with our kids, my brother and their families.  While driving on the way home from Corrolla Beach,  Nancy made reservations through the Colonial Williamsburg reservation center, she got the last one for the afternoon at King’s Arms Tavern.  Aren’t smart phones the best when traveling!  We confirmed and planned by text.

Lunching in the “beautiful” room.   Love the staff photo bomb.

Warning!  I love Williamsburg and the study of Colonial American history.  The buildings, the costumes, the dedication to accurately represent the authenticity of the era.  Beginning of the nation took place here.  The colonial print shop as the first outing for our first born. It was a cold January day; she was a newborn warm in a suuggie under her daddy’s coat. We went for a walk and lunch.  We were stationed down the road at Fort Eustis and often came to the city for walking and dining out.  We have vacationed there with our kids.

Why is Williamsburg important?

Need a bit of background?  Why Williamsburg?

The House of Burgesses’ stand in support and independence drew the powerful Virginia colony into the fray.

The memorable Gunpowder Rebellion took place when the Royal Governor seized the munitions, a key action by the Crown to deprive colony’s militias of arms and munitions.  The Governor’s action was similar to the one in Lexington and Concord without the battle.

Giant native sons of the era walked the streets and served as elected officials.  History was being made!  Thomas Jefferson who was educated at William and Mary, Geo. Washington, Patrick Henry, the fiery orator and lawyer were there!

When the capital moved to Richmond and transportation hubs by passed her,  the city faded into history as a sleepy Tidewater town.  Many buildings and homes remained standing.  The Burton Church and William and Mary College were in continual use.  The capital and Governor’s Palace were in ruins after a fire and neglect.

The Reverend W.A. R. Goodwin, parish priest of Burton Parish Church, one of the oldest established churches in the colonies had a dream of preserving the history of Old Williamsburg.  During 1905- 1907 renovations of Burton Church, remnants of earlier years discovered  peaked Goodwin’s interest.  The vision to restore Colonial Williamsburg for future generations was born.

Prior to that fateful meeting, Goodwin managed to get a few investors to purchase and renovate several buildings.  His other efforts for major support were unsuccessful in interesting financiers in the visionary project of restoring Colonial Williamsburg.   That was to change at the meeting.  Goodwin met John D. Rockefeller.   Godwin invited him to visit. On the second visit, after a lone walk through the historical streets,  Rockefeller’s imagination was fired; he caught the vision.  He would support the renovation of an entire town!  Afterr a town meeting late in the aquisionsion phase which was very low key to not cause prices to inflate, a town meeting was held to inform residents of the plan.  Only 4 vetos were cast.

Teams of experts were assembled by the willing achitectural firm who was selected after others’ refusals to oversee all renovations.  The firm totally caught the vision for empolying renovation standards of the day and to make more that  are still in practice today.

The rebirth of the colonial capital was taking place!

For us lifestyle folks interested in antiques, history and restoring our homes for modern life, we can appreciate this endeavor.

Did you know that the group of talented people who worked on  the renovations in the early years were setting a high standard for historical renovating that still stands today?  The all-encompassing preservation and rebuilding of this important colonial city by its very scope that set high standards to be authentic and as true to the records as possible.

How did those standards come about?  The main architect firm that oversaw the project employed some forward thinking architects.  As a team, the men  researched, restored and rebuilt accordingly and with expert craftsmen.  Their work was supported by the details work of researching old documents and records.   The Advisory Committee of Architects was established to superintend the project under Goodwin and Rockefeller’s direction and vision.  They established 10 principles of restoration that provided the parameters and guidance of the project.   Their work continues under the name of  Colonial Williamsburg Foundation. 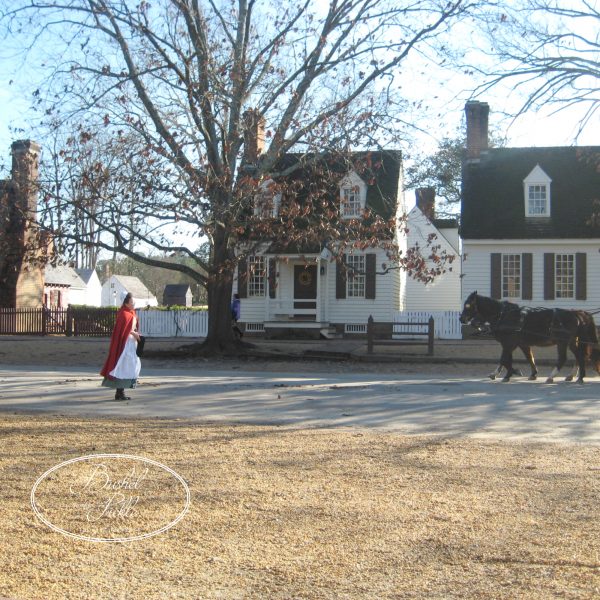 This was a monumental undertaking.  Many of the building were in ruin or disrepair.  Today,  the restorations continue.  Williamsburg celebrates its place in Colonial history.  One year we stood in  the courtyard of the palace as the Declaration of Independence was read by reenactors from a balcony.  The experience and feel of the crowd was respectful and excited.  Wonder how the colonists felt when they heard the news.  Excitement? Fear?  We’ve seem Geo. Washington ride his horse down the street, Thomas Jefferson and Patrick Henry give speeches and interact with the audience. Crafts men and women share about their “businesses” and craft as they are actually creating.

The commitment to education came be seen with differing programs available to teachers.  Research and excavating is on going.  Skilled builders share as they nudge animals to move massive logs and use their axes and muscles to build barns of original sites.  KIds enjoy Williamsburg too.  They can run and touch and inquire. the enactors are skilled and great storytellers.

The large dining room at King’s Arms was empty except for us.  Emma looked around the paneled room and said, “This is beautiful.”   Oh, be still my Williamsburg loving heart.  Lunch was delightful and unhurried.

The Armory open air market; a perfect day for photos

Dining at the King’s Arms Tavern where the style is simple and colonial rich with elegance. 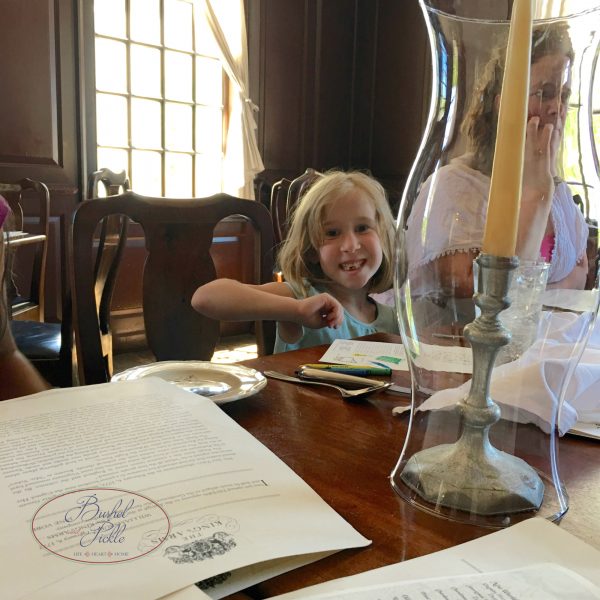 Lunch in the Beautiful Room

A reminder of our history and the determination to preserve, honor and remember.

I used  Williamsburg Before and After: The Rebirth of Virginia’s Colonial Capital for information on the renovation process history.

Love seeing grand kiddos learn to swim! They are

Vintage fine china can be so delicate and elegant.

First snow of the new year! It's wet and slushy an

Meg’s cute cottage. Meg has cats and a roommate

Family favorite! Today it is part of Nancy's birth

Family fun for all ages! Urban Air in Lancaster i

The weather outside is frightful… Peach and I do

Visit Bushel and a Pickle's profile on Pinterest.
0 shares